The downstairs gallery with its shop window is a gift to Belfast and its numerous visual artists. The shortage of spaces to exhibit hurts all generations of artists. Heartfelt thank to the groups behind this venerable PS square as it moved from site to site over the decades.  It has a proud inventory od daring and refreshing choices what to introduce. One is the relentless sympathy for the art in some shadow. Printmaking plays second fiddle to painting and sculpture in most petit-bourgeois societies, consequently making a fuss about it feels like recovery from illness.

A painter Aimee Melaugh (www.aimeemelaughart.com), and printmakers Lucy Moyes(https://lucymoyes.com) and Cathy Scullion received the Belfast Print Workshop residency award in 2018, soon after their graduation at the Ulster University. No wonder that a viewer may connect these prints with their graduation exhibition.  Yet, I see changes - mostly in confidence to experiment.

Still thinking about her grandfather's experiences of WW2, subject of a number of her paintings, the current exhibits wrestle with the contradictions between a mute image and the multisensory duration of those experiences.

A monoprint is nearer to painting, the technique does not allow multiples.  It offers surprises not visible before the plate is pressed onto the paper.   The above image is not only about a memory of the WW2, but it is also about the artist's intention to approximate in visual terms what it felt like to be in the army then. Hence the dislocated centre of the messy massive explosion of hues and tones,  engulfing most of the monoprint plate. The mighty fire of explosions while towering over the construction on the left is peopled by two monsters created by chance. not intent, it seems.  In the central biggest white loop, I see a dot for an eye, and dark head and torso, as if torn off someone's body and pushed up into the hot fiery cloud.
Diagonally opposite, down left, is a form, reminiscent of a bust, with a head of some strange creature, whose body has been blackened and consumed by the explosion.  Underneath both is a line shaken out of its pathway. Although the caption mentions night, the view is well lit by the explosion.  Mankind upsetting nature. The monoprint's capacity to add through pressure what the brush has not defined appears like truth free from intentional control, unarmed and unconditional.  That freedom is to have the last word, in art and in life.

I refuse to accept the view that mankind is so tragically bound to the starless midnight of racism and war that the bright daybreak of peace and brotherhood can never become a reality... I believe that unarmed truth and unconditional love will have the final word. Martin Luther King, Jr.(https://www.brainyquote.com)

In  Flood, the central composition is given so much distance from the background that it seems self-contained and floating.
Its ground is still like the last second before an explosion, an explosion with its reflection on a calm water surface.  It is mostly monochrome, just modulating the tonality, except for few burgundy red smokey curves, dark grey parallels, the lemony yellow two tiny enigmatic shapes and the horizontal boundary between the fury and the calm.
The enigma of the image increases in the lithograph, Some puzzling coincidences. The identifiable objects ( a seat, a sign, a book, a camera, etc) are given enough of the light hue to leap from the ground to the front as a part of the overwhelming black.


The same stone receives  more colours and shapes... (A note to the reader: lithography means printing from stone, so "stone lithograph" looks to me like a pleonasm)


Both above plates are dominated with clarity of some details surprisingly peacefully shared by between abstraction and mimesis. Their decorative appeal is countered by consumer's habit, by echoes of civilisation wedded to inventions and ownership. That allows to willful use of scale. The images avoid a close link to either politics or critique of it but linked they are - being presented out of scale and abandoned like so much in the so-called "consumerist " society.
Melaugh's last plate returns to the fluidity of abstract expressionism with the freedom to insert descriptions while denying their identification.


It insists on geometry and gesture to co-exist in an unfathomable drama. Echoes of the earlier monoprints govern  Strike's top part. Again, a ghostly red-faced half figure appears by chance wearing navy cadet's hat.  It may not be that at all. It just looks to me like that. Issuing freedom for imagining it or not is one of the treasures of abstract expressionism, of gestural painting.  The image recedes from the front to its depth forging the illusion of space. The two large "sheets" of black and white parallels on the left, and multicoloured misty on the right stand like some guard of honour to the complicated middle.  Les bio-morphic than the other images it feels a little like a final achievement.

In the installation, Melaugh's smaller prints were alternating with a large scale of carborundum prints by  LUCY MOYES. 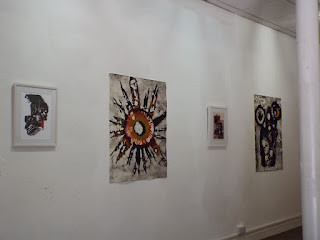 I read that printmakers love this technique for its versatility, and maybe, for its appearance. It looks like a painting, subconsciously perceived as more valuable than a multiple.
Moyes trusts simplicity to carry a complex feeling.  The Night Tree, in particular, lends its mimetic dynamics to the animal kingdom or early prehistoric art. Free choice, no barriers. If I were to name at least one other artist who painted images that doubted their identity and thus enjoyed all possible ones, I think of Juan Miro.

The next print, titled Puca, is a puzzle.
Mother and child? Madonna and the baby? Not familiar with the word,  I looked up its title online and read this:

A Pooka is a shapeshifter and can take any form it chooses but usually, it is seen in the form of a dog, rabbit, goat, goblin or even an old man. Traditionally a Pooka is seen as a dark, sleek horse with a long wild flowing mane and luminescent golden eyes. (https://www.yourirish.com/folklore/irish-pookas)


In her own words, the artist is "...intrigued by the idea of something unfamiliar happening to the familiar..." (Gallery handout). She gave that job to the black hue, to shift shapes nearer of further from the picture plane, and thus shift the perception of what is made visible. 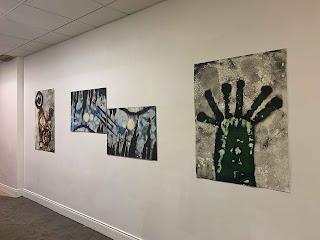 As her last plate signals, this artist plays freely with traditional stories indicated by the title, while her inventiveness leaves the traditions transformed.  Here she invites a slang to assist.  According to the dictionary
An oogle is a panhandler who lives on the streets, most frequently a new or unserious one who is perceived as homeless by choice, rather than by necessity.


What is made visible here? A kind of nonsense shape, a doodle, a play with chance. Yet, giving it the same earthy roots as any invented monster may have.  Even if not threatening. This art cherishes the energy of impulse, of chance, of instinct - and lets it settle on one decisive denouement.

That concern appears also in the installation  by 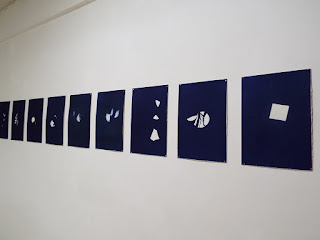 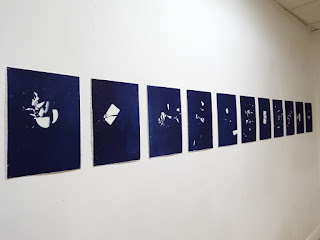 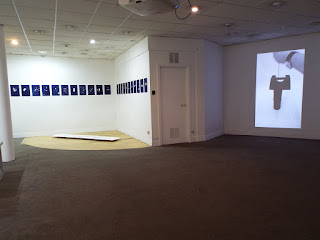 The video on the right registers the stages of breaking mirrors.  It is one hour long, slow, slightly enigmatic in its hesitance to state why those mirrors must be broken,  and in that manner.  The artist generously made a shorter version, which I prefer, for its dramatic economy and clarity.  Here are the links: 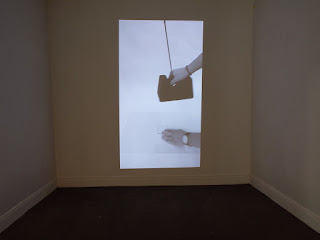 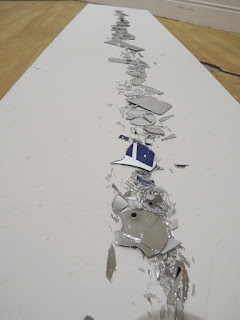 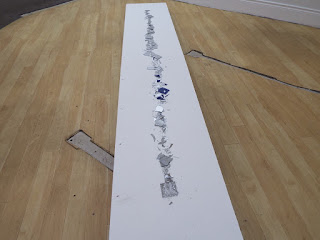 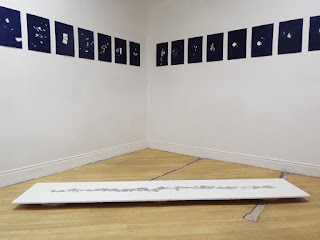 The video and the cyanotypes take the floor installation of broken mirrors as their own raison d'etre.  To dominance of "video -performance" in the destruction of something useful and ordinary,  shifts the meaning into the troublesome debates on usefulness and uselessness of art.
Immanuel Kant set up as if in stone the thesis that art is disinterested.  Scullion is driving her creativity to disprove it, yet by embodying the destructive principle, supporting it. The process transforms the useful object into shards that appear as cherished details on the prints and as a seemingly innocent collection of slivers of mirrors, rescued for this floor relief.

The installation does not insist on a particular sequence of viewing - a viewer could absorb the installation of prints and broken mirrors as one work of art, or as two consecutive one. Or as three parts of one installation -  by including the video.  As such, it is an intriguing example of the dynamics of intention.
The breaking of mirrors presented in the long video precedes the printmaking and the sculptural floor installation which was made  last.

Consequently, this set of works of art unfolds a sense of resolution to the outcome:
The video records touch and sight estranged from its values by the free fall of the weight governed by the Earth gravitational field.
Broken mirrors embody a loss of chance to see oneself - a kind of estrangement from the daily use, from the expected, what mirrors are for.
The prints cherish the broken mirrors as poetic alienation from their useful function.
As real - the disaffected mirrors are harvested for their visual poetics on the wooden ground.

The three exhibitors share one idea:  to go on a limb to make their subject, history, phantasy,  personal.